A GAME ANALYSIS OF OLLIOLLI2: WELCOME TO OLLIWOOD 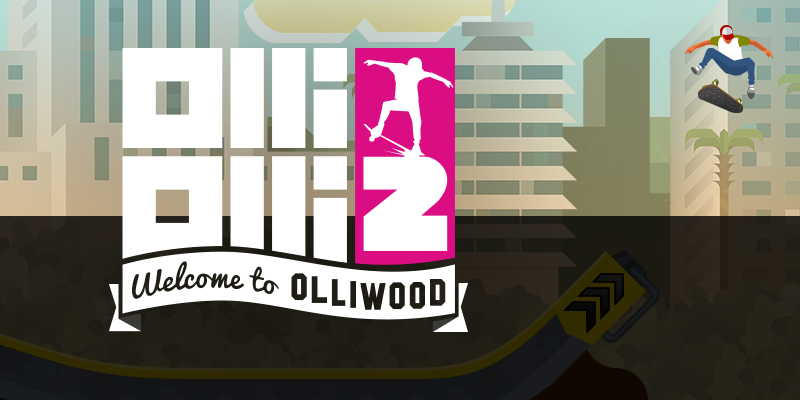 GENERAL ELEMENTS OF OLLIWOOD 2
Indie Developers of OlliOlli 2 (Released 3rd of March in the US and 4th of March in the EU) Roll7 and Game Designer Andreas Yiannikaris envisioned a fast paced skating game with pseudo-real world elements in an abstractive graphically represented 2D game world, targeting players ages 3+ with a competitive edge it involves the player to interact with a device (as it is a “cross platform game” released to the PlayStation 4 and PlayStation Vita it could be touch, tap maybe drag or a controller with predefined control scheme) to do tricks such as a skateboard jump commonly known as the “Ollie” and many others tricks. Having never played this game or series, it was clear it was somewhat of an arcade type score-attack game, on starting a new game it placed me in a tutorial which offered clear instructions how to play the game but not necessarily a clear objective or story, making it quite a casual game with elements that a player would look to spend during their free-time, the next thing to notice is it’s difficulty which will be discussed when it appears later, The game itself relies on the player to hit a button to move a running start skater in a Right Only, Up/Down Only direction and another series of buttons, flicks, touches, to reach a state to avoid obstacles(stairs), land on a rail(grind), or gain points(flip tricks) in order to reach the end of the stage to “win” the game, a simple rule applied to this game: finish the level to reach the next one.

SCENE 1 – WELCOME TO OLLIWOOD.
On hitting the x button in what would appear to be the main menu, I was displayed an “overlay” screen with Best Score and Challenges giving hint to a Score System and Challenge system, alongside something called Best Combo and “Rad Mode”, this suggested a form of competitive social gaming among a highly competitive community that this game (seems to) actively target since it already seemed a difficult game. The score system initially represented the game mode rather than the system itself (aka score attack), when earning points, or when the game awarded the player bonus points on timing button presses and penalising them (or even ending the game from hitting an obstacle) in other cases, missed timing results in a “sloppy” landing meaning the player that would had earned 100 points from an “Ollie” instantly loses all 100 points! And vice versa timing the input at what would be “the sweet spot” resulted with a “perfect” landing and would award the player double or triple points (aka a x2, x3 multiplier).
I eventually handed the controller to someone else to gauge the difficulty to learning curve ratio from a different perspective, primarily the game targets hard-core gamers, first and foremost, but at the same time due to it having a high difficulty-learning curve ratio highly self-testing players and people with high interest with skateboarding.
Though the game provided an incentive to do the challenges, regardless the difficulty it gave the player an idea to what their level of skill was and which areas they needed to work on to improve at the game in order to earn higher scores for more/ better “bragging rights”.

A series of examples for “bragging rights” can be seen in the challenges:

* “Get a score of 20,000” On my first attempt was around 4,000-5,000 without knowing the controls fully it was a little frustrating to think about trying to get 20,000, but after looking again “Scene 1” the game intends to give the player an ideal balance of how much is involved in the game and also that people that have played it before can still feel acquainted to it and those new to it feel a connection and find themselves somewhat immersed and find themselves getting better at the game.

* Finish a x5 combo with an OK landing or better.” Third attempt showed a result, after some consideration of my position as a gamer it became pretty obvious I’m an occasional hardcore gamer. Again through the use of Challenges the game intends to push the player in a specific direction and exploit their own weaknesses.

*Land 2 Kickflips – with the game mechanics stemming off pseudo-real world mechanics in skateboarding the game included control references to the majority of skateboarding moves in a user interface called The Tricktionary again Challenges like this set the level for the player and test them.

* Finish with no sloppy landings – This challenge is intended to “train” the player with timing the “Ollie”/ skateboard jump as it lands to the ground, Landings are rated Sloppy, OK, SICK and PERFECT, with this as a target to finish after enough play time to accomplish it the player should at this stage be able to keep up with the progress of the game’s OTHER Challenges, as landing is what dictates what score the player achieves..

* Nail a Perfect Landing – This appeared simply to be an incentive to keep the player interested, an Important aspect of Challenges are keeping them par to the player to which these had accomplished, rather than think the player is challenging the game, interpret it the former, the game is challenging the player, with this type of incentive the player might feel more inclined to continue to play the later stages (or Scenes as this game refers them as).
USER INTERFACE
CAREER
Career mode, displayed a Film Strip as the GUI for the player to select out “a scene” to play at, and generally in any video game, increases in difficulty, what was noticeably different with OlliOlli 2 was its higher difficulty “pro” film strip was locked, until the player had accomplished the Challenges for the Amateur level “Scene”.
THE LEADERBOARDS
As OlliOlli has emphasis on targeting a competitive social community rather than the more casual community, they have given the player access to Global Leader boards, with the top 20 rankings in the 7 digit area and in my Analysis the 5 digit area, This was a clear cut message, and an incentive for the Player to retry the same level over and over again to earn a higher score, also increasing the game’s replay value, and it’s overall value to the target gamer.

SPOTS (GAME MODE)
Found in the top right corner of Career/ or in the main menu is a Game mode, with Objective elements – “Test your Strength”, In this the player is presented with a spot, or a more appropriately “skate spot” to which they are pitched against themselves (their own score) and the rest of the world (their scores), They are given one “line” chance per game, if they land a trick prematurely the game ends and their score is shown to them. (A line in skate slang is a term for a set of props, generally hand rails, ramps and funboxes a skater must use to seek rating/esteem from other skaters).
DAILY GRIND (GAME MODE)
Similar to Spots, OlliOlli2 offers the Player the opportunity for fame and glory, by participating in these 24 hour daily events, resets occur 2am daily – The player can practice as much and as long as they like but can only make ONE attempt at submitting their score to the Daily Grind’s Leader board.
SKATEPARK

On a thought-pop, This – I assumed was an infinite location for practising any type of skating move as the title suggested, but it is in-fact misleading, this contains a collection of skate spots in a skate park, but is in no way infinite i.e moving from one spot to another without using UIs as navigation. This is where the game originally starts for new players to show the player what the controls are and how to play. It uses the basic assumption of the playing knowing how to run, jump and do a trick and follows through with those 3 tutorials and an additional one for “grinds” (Riding rails).
PROFILE

– The Tricktionary is a collection of skateboarding moves within the game to give the player an insight into how to perform tricks and thus lower the difficulty-learning curve ratio in a quick and easy fashion that is understandable for all ages.

OPTIONS
Last in the Main menu showed Controls (as a easily readable diagram for the player to quickly find which ever binding they happen to be looking for or getting confused with) no alternative control schemes for this game don’t seem necessary. Volume settings, Save settings, and Credits. Generic and Mandatory in mostly any development for a game.
THE GAME MECHANICS
The Mechanics of OlliOlli 2 are that of an arcade game without any element of a Storyline or Player relationship, other than to those who enjoy skateboarding, The basics on starting the game are placed with constraints that Physics are applied to a (running start) skater standing on level ground that starts running to the right and eventually hopping on his board, there is no control over this. There’s a button to apply an Impulse of Velocity in order to maintain this speed, a button to “Ollie”, and shoulder buttons (consoles) to imitate left and right rotation, different combinations of these controls result in different scores, such as. Rotating to the left or right while flipping the board (kicking) results in a kickflip 180, which is worth more than the standard kickflip since the board needs to be facing the same direction (or opposite direction, simply maintaining the wheel direction) to maintain velocity, otherwise the player would fail and the skater would fall off the board and end the game. Other influences of score is this “combo” other than the aforementioned, with each successful trick, a multiplier would be applied to the score, with “OK” landings the average score ending a game would be as high as x4 whereas Perfect landings could results up to a x8 “combo multiplier”. This would only multiply the score of the existing combo not the score already earned. With a concept taken from reality without repetition, there’s not much else to address. For functional navigation the player navigates through the UI by means of a pause menu or the end game menu offering the option to quit to the previous menu.
Other Elements There’s a certain Interactive approach to how the menu has been displayed, they chose to be very visually clear with the interface and game UIs limiting button functions to a max of 2-3 unlike other games where there could be up to 6 functions mapped to a controller.